Here are overview bios for the characters in The World Ends With You. Due to being overviews, these will be kept as spoiler-free as possible, with some bios taken directly from the DS version's manual. If you have beaten the game and want to know more about the characters, click on the character portrait to the right of each bio.

"Even if I could, I wouldn’t want to see inside other people. They can keep their secret gardens, thanks."
At fifteen, Neku Sakuraba (桜庭 音操 Sakuraba Neku) is an ardent graffiti fan, but far less enthusiastic about forging relationships with other people. When the Reaper's Game throws him into contact with other Players, he has two choices: open up... or get picked off.

"Listen to yourself... We’re partners, Neku. But I don’t understand you! Let me in! Tell me what you're thinking!"
Fashionable and fabulous at fifteen, Shiki Misaki (JP: 美咲 四季 Misaki Shiki) knows clothes. While she puts on a cheerful face to lend Neku some much-needed moral support, deep down she harbors a secret... She never parts with her homemade stuffed animal, Mr. Mew; to survive, Neku can never part with her.

"I ain't treading on thin ice! Shibuya ain't cold enough for ice, stupid!"
Hot-blooded and hard headed, Beat (JP: 尾藤 大輔之丞 Bito Daisukenojo/ビイト Biito) is the polar opposite of Neku— even if they're the same age. Still, despite his emotional outbursts, he has a big heart. He's always ready to throw down and ollie into combat on his board, with Rhyme right there beside him.

"Two heads are better than one, so four has got to be better than two !"
Rhyme's (JP: ライム Raimu) earnest and hard-working attitude proves a big help to Neku and Shiki early on, as well as to her partner, Beat. She has an addiction to adages and no shortage of smiles, and without her, the others would be lost.

"But Neku, I thought you couldn't afford to lose. Give up on yourself, and you give up on the world."
It's quickly evident Joshua (JP: 桐生 義弥 Kiryu Yoshiya/ヨシュア Yoshua) is clever beyond his fifteen years— and as sly as they come. Unfortunately, his insufferably snotty attitude only serves to widen the gulf between him and Neku...but his knowledge, especially about the Game, does earn him some points.

"You can feel the pulse out here. People's ideas conflicting, changing... I like bein' in the audience. I'm a stargazer."
Koki Kariya (JP: 狩谷 拘輝 Kariya Koki) is a Harrier Reaper who prefers peoplewatching to his job. Despite this, he is a skilled Reaper, using his observational skills to his advantage. He frequently sets up challenges or games to try and make his job more interesting, and is frequently found together with Uzuki.

"I just want my job to be...what’s the word... Rewarding! That’s it. I want my job to be rewarding."
In contrast to her coworker and friend Kariya, Uzuki Yashiro (JP: 八代 卯月 Yashiro Uzuki) is hotheaded and laser-focused on obtaining a promotion from Harrier Reaper. She acts tough and arrogant in front of Players, and is a perfectionist when it comes to her job.

"Listen up, Phones! The world ends with you. If you want to enjoy life, expand your world. You gotta push your horizons out as far as they'll go."
Sanae Hanekoma (JP: 羽狛 早苗 Hanekoma Sanae) is the relatively laid-back owner of the cafe WildKat. While he lends Neku help while he's playing the Game, Hanekoma seems to know more than he lets on... 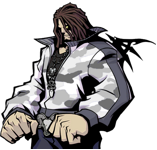 "The proof is in the pudding... The pudding of their doom."
Yodai Higashizawa (JP: 東沢 洋大 Higashizawa Yodai) is a Reaper Officer. Recently promoted, he is eager to perform well in administering the Game. He tends to speak in food metaphors and puns.

"SO ZETTA SLOW!"
Sho Minamimoto (JP: 南師 猩 Minamimoto Sho) is a Reaper Officer. Despite being a capable Reaper, he has little to no interest in working with his fellow Officers, often arriving late to meetings. He’s loud and arrogant, and speaks in math terms regardless of whether or not his conversational partners understand.

"Tick, tock, Minamimoto. You’re 9 minutes and 42 seconds late."
Mitsuki Konishi (JP: 虚西 充妃 Konishi Mitsuki) is a Reaper Officer. She’s nicknamed “Iron Maiden” for her aloof and cruel personality, and runs personal statistical rankings of her fellow Officers’ personality traits to determine how fit she thinks they are for the role, in addition to being formidable in battle.

"I have a feeling that tomorrow’s Game will be very entertaining."
Megumi Kitaniji (JP: 北虹 寵 Kitaniji Megumi) is in charge of the Reaper officers. He calls meetings during the week to assess the performance of the Reapers and progress of the game. For some reason, he seems to be particularly interested in the current Game.